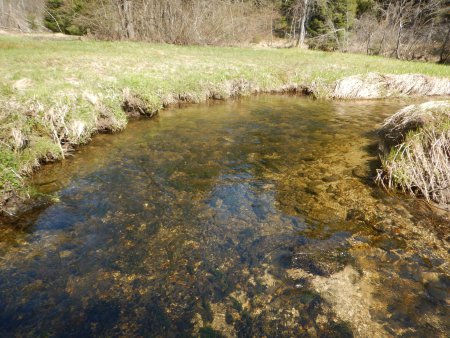 There is a wide range of causes and manifestations of structural deficits in flowing waters, mostly caused by humans. By implementing specific measures, the original conditions should be restored as far as possible.

The substrate of freshwater pearl mussel streams should ideally consist of a mosaic of different particle sizes. Not only does this have an impact on the stability of the streambed, but it also provides a rich and varied habitat. For the freshwater pearl mussel and its host fish, areas with gravel grain sizes (2 mm – 64 mm) and a well-perfused pore space in this substrate (gravel banks) are of critical importance. In addition, the substrate should have a certain extent, thickness and position stability so that the (adult) mussels can retreat into the substrate during extreme water levels and not be washed away when water levels are high.

Erosion is a normal process that happens in a flowing body of water. Material is eroded on cut banks and then deposited on slip-off slopes. Depending on discharge, material of all sizes (bed load) is moved downstream and deposited in areas where the current is slower or, when the water levels are high, deposited in the floodplain. An increased erosion rate can throw this balance out of whack. More sediment ends up in the water and is deposited there and in marine estuary areas. This leads to unnaturally high amounts of silt or sand building up which can fill in the pores of the interstitial habitat that the juvenile mussels grow in. It can also cause the streambed to become less stable, making it more difficult for mussels to establish there.

The described deficits occur in the individual streams included in this project in different ways. The combination of measures required to rectify these deficits must therefore be planned and implemented individually for each stream section affected. 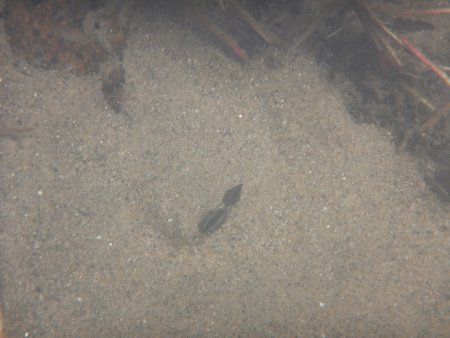 Causes: The increase in soil sealing and vegetation-free areas (agriculture) in the catchment areas of the streams leads to an increased surface run-off and input of fine sediments.

The straightening of waterways shortens the freely flowing stretches of water and increases the flow velocity. This results in an unbalanced erosion and deposition and, above all, in the removal of the gravelly substrate that the mussels need to bury themselves.
Sometimes gravel is even removed directly by people for construction activities. 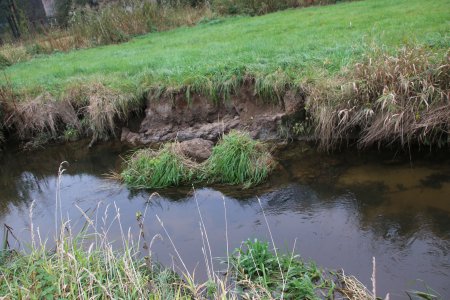 Problem: Increase in the flow velocity and increased bank erosion, no overflow on the floodplain during elevated water levels

Cause: The cause of depth erosion of a flowing body of water is the erosion of the streambed. When waterways are straightened, the gradient increases and so do the forces working on the streambed.

Cause: Due to the straightening of waterways and river bank construction, uniform and, above all, fast-flowing flow patterns occur. If the land is used right up to the edge of the water and if there is a lack of vegetation, this can result in erosion, heating of the body of water and an increase in aquatic plant growth.

The most effective way to prevent fine sediment inputs into streams is to adjust the channel flow and land use in the catchment area. Fine sediment inputs that cannot be regulated in this way can be caught by riparian buffer strips and in sediment traps.

The addition of structural elements such as large stones or dead wood create retention areas that catch transported materials (bed load). If there is no longer enough suitable substrate coming from upstream, suitable bed load materials can be added to the streams instead. The streambed can also be raised.

The banks can also be levelled in order to allow water to spread to the flood plains during periods of high water. This means that fine sediments are deposited on the flood plain instead of in the river channel and that the flow velocity and erosive force of the water is reduced.