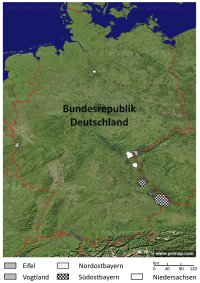 The MARA Project covers the entire distribution area of the freshwater pearl mussel in Germany. The total project area is split into five smaller sub-project areas in the four German federal states of Bavaria, Saxony, North Rhine-Westphalia and Lower Saxony.

The distribution of the freshwater pearl mussel (Margaritifera margaritifera) in Bavaria is limited to the low-lime Bavarian Forest and the Fichtel Mountains, both of which are low-mountain regions. This species of mussel is widespread in streams and rivers in these areas, however over the past few decades there has been a rapid decline in stocks, like everywhere else in Central Europe. As such, now many populations have completely died out or have shrunk to just a few individual animals.

The project area in South-East Bavaria is located in the southern part of the Bavarian Forest and covers the districts of Passau, Freyung-Grafenau, Regen, Cham and the city of Passau. In this area, six priority target bodies of water were chosen: the River Ilz and its backwaters, the River Ranna, the River Kleine Ohe and the River Große Ohe, which flows into the River Gaißa, the Biberbach Stream and the Wolfertsrieder Stream. In addition to freshwater pearl mussels and their host fish (brown trout), these bodies of water are also home to the common nase and the huchen, which also benefit from the project measures as they are responsibility species.

There are a total of eight bodies of water in North-east Upper Franconia along the European Green Belt in the districts of Hof and Wunsiedel. The total size of the project area is 85 km2.

The freshwater pearl mussel breeding and habitat improvement activities in this area are primarily concentrated in the Raunerbachtal and Triebelbachtal valleys, the last refuges of the freshwater pearl mussel in Saxony. They lie within the catchment area of the White Elster River in Vogtland in Saxony. The information provided is aimed at interested parties from throughout Saxony.

The North Rhine-Westphalia project area is located in Monschau in the district of Aachen. The implementation of measures for habitat upgrading and the breeding of the last freshwater pearl mussel populations in North Rhine-Westphalia is primarily concentrated on the German part of the Perlenbach Stream above the Perlenbachtalsperre Lake, the only remaining body of water that is home to freshwater pearl mussels in North Rhine-Westphalia. As well as the source, half of the catchment area and the course of the stream is actually located in Belgium, as such we also plan on implementing measures there in collaboration with our Belgian colleagues.

The Lower Saxony project area is located in the district of Celle. The most significant restoration measures on the Lutter were successfully completed in 2005. As such, today the river is home to a self-sustaining freshwater pearl mussel stock. Therefore, this body of water primarily serves the MARA Project as a reference body of water in which comparative studies will be carried out.