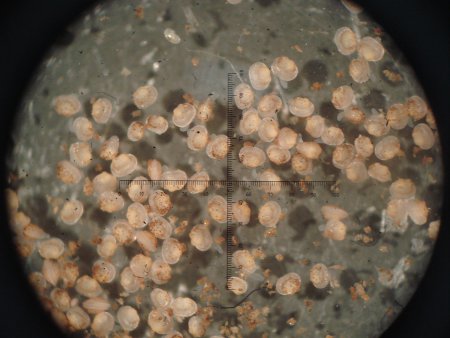 The freshwater pearl mussel is found in near-natural and clean running water with a low lime content in siliceous catchment areas. In order to satisfy their needs, several different requirements must be met at the same time. They require very high water quality with a low nutrient content, ideally the water should meet the guide values of the German Drinking Water Ordinance (Trinkwasserverordnung). Another requirement is that the water should have a high level of structural diversity. The substrate structure plays a particularly important role here. It should contain a wide range of different particle sizes and a high proportion of gravelly material. Only then can the necessary conditions arise: on the one hand, a high level of stability, which is important for the long-term settling of the mussels, and on the other, a good flow of water through the interstitial zone so that the juvenile mussels can grow successfully. 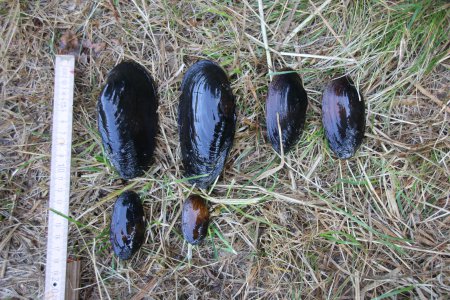 Their high degree of specialisation is also reflected in the life cycle of the freshwater pearl mussel, which consists of several different stages. Freshwater pearl mussels start their lives as glochidia, tiny larvae. Pregnant females can produce several million glochidia and release them into the water. However, only a fraction survive as they must attach themselves to a suitable host fish to develop further. For this, depending on the water system, only two species of fish come into question: the brown trout (Salmo trutta) or the Atlantic salmon (Salmo salar). Thus, the presence of these fish is also a basic requirement for the presence of freshwater pearl mussels. After several months of development, the juvenile mussels leave their host and spend several years in the interstitial zone. To begin with, they feed as limnivores and feed off surfaces with their ciliated foot. Their feeding mechanism changes in several steps and after a while, the mussels become filter feeders. Only then do they return to the surface of the substrate and start to live as filter-feeding adult mussels. After 15-20 years, they become sexually mature and will start to produce glochidia themselves. Under the right conditions, freshwater pearl mussels can live to be 100 years old in Central Europe.

In addition to their ecological characteristics, freshwater pearl mussels are a cultural and historical gem. Their ability to create pearls, which is where their name comes from, helped to create a flourishing pearl fishing and mother-of-pearl industry in certain regions in the Middle Ages. Pearls were used to decorate both religious and secular regalia and extravagant clothing. The massive drop in stocks and the increasing availability of cultured pearls in the 20th century meant that regional mother-of-pearl industries were closed down. This was extremely beneficial for freshwater pearl mussel stocks. 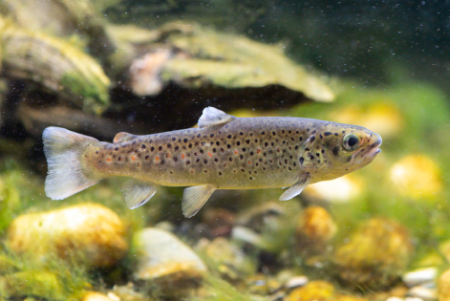 The brown trout is adapted to oxygen-rich, flowing water that is cool during the summer, so their requirements are quite similar to those of the freshwater pearl mussel. The site-faithful and territorial brown trout likes to hide under the cover of different shelters, such as under overhanging riverbank vegetation or between large rocks and dead wood. To ensure a successful propagation of the freshwater pearl mussel, it is incredibly important to have a close connection between structures such as this and areas of substrate that are suitable for the mussels. In autumn, brown trout dig redds in clean gravel banks that they then lay their eggs in. The young fish then hatch in early spring when the temperature of the water starts to rise. In the early stages of their life they too are dependant on an intact substrate. Due to their loyalty to the site that they were born on, many local varieties of brown trout have developed that differ in colour and size. Their suitability as a host for freshwater pearl mussel glochidia also varies between the individual genetic lines. Therefore, in the MARA Project, the needs of brown trout will always be taken into consideration during the implementation of renaturing measures and we will strive to preserve local varieties of brown trout and use them in the breeding programme. 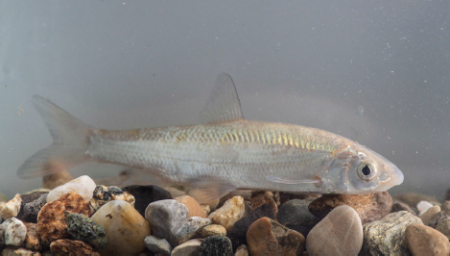 The common nase is a social species of fish which used to occur en masse in the grayling and barbel regions and was considered the "bread fish" of river fishing because accounted for a significant proportion of catches. It is a migratory species that uses different habitats depending on the time of year and their age. The continuity of the body of water is therefore incredibly important for the common nase. In spring, they frequently use shallow gravel banks to dig redds. At the start of their lives, the juvenile fish need areas of flat, slow-flowing water. As they get older, they look for deep pools as resting zones, especially in winter and when water levels are high. With their strong inferior mouths, they remove plants growing on hard substrates. Due to the fragmentation of their habitats and lack of sub-habitats, common nase stocks have dropped massively in many places. 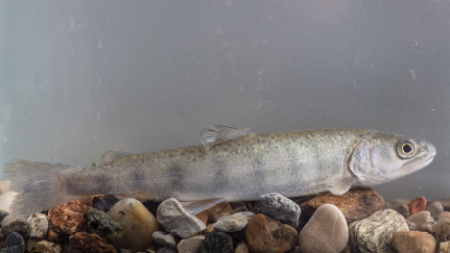 The huchen is endemic to the River Danube and so can only be found there and in suitable backwaters. Like the common nase, the huchen mainly settles in grayling and barbel regions. The huchen has been nicknamed the “Danube salmon” because it can grow up to 1.5 m in length and can be found almost everywhere in the Danube. It is a predatory fish that mainly feeds on other fish. The huchen also undertakes a spawning migration to lay their eggs in gravel banks in spring. To begin with, the juvenile huchen also need shallow areas of water and as they grow they move towards deeper areas of water. The causes for the decline in huchen stocks are similar to those of the other species mentioned above. In addition, their decline may also be partially due to the drop in forage fish, such as the common nase or the barbel.