In North Rhine-Westphalia, freshwater pearl mussels can only be found in the Perlenbach Stream. This stream runs through the Perlenbach-Fuhrtsbachtal nature reserve for 5 km. The breeding of the last freshwater pearl mussel population in North Rhine-Westphalia began in 2006. However, it had to be stopped two years later because the free stock in the Perlenbach had died out due to old age. Luckily, the bred juvenile mussels became sexually mature in the meantime and some of the successfully bred animals have been gravid since 2020, allowing the breeding to continue.

The breeding work is split between several different sites.

The infested brown trout (around 3000 per year) are kept in three different locations: a local fish farm, Kalborn Mill in Luxembourg and a field office of the North Rhine-Westphalia State Office for Nature, Environment and Consumer Protection (LANUV) in Albaum in the district of Olpe. The juvenile mussels are obtained in Luxembourg and Albaum.

The subsequent laboratory stage is split between the team in Luxembourg and the Biological Station in Stolberg, in the Aachen CitiesRegion. After the laboratory stage, some of the juvenile mussels are kept in aquariums and troughs in Luxembourg. At the end of July/start of August, the rest of the juvenile mussels are moved into Buddensiek plates and placed in the Perlenbach or kept in a trough in water near the river. Once they have grown to > 5mm, they are moved into gravel boxes.

It is possible to visit the mussel laboratory in the Biological Station for the Aachen CitiesRegion and the breeding station at Kalborn Mill in Luxembourg by prior appointment.

As part of a precursor project, the Biological Station created a short film about the breeding cycle:

Reutherfurth Mussel Breeding Station in the district of Passau

Reutherfurth Mussel Breeding Station in the district of Passau

A pond system in Reutherfurth was used for mussel breeding for the first time in 2011, but at that time the mussel breeding station was a sub-tenant of the trout farm that was there. Since 2013, the system has been used exclusively for freshwater pearl breeding.

In autumn 2015, as part of the precursor project „Arkonavera“ work was carried out to optimise the system for mussel breeding. The work was funded by the German Federal Ministry for the Environment, Nature Conservation, Nuclear Safety and Consumer Protection, It was finally completed in spring 2016.

It is now an open-air system made up of circular flow tanks and ponds that can hold up to nine different host fish lines infested with glochidia from different mussel populations.

Regular tours of the breeding station are organised during the summer months. The Ilz Information Centre in Fürsteneck Castle or the theme trail along the Wolfertsrieder Stream provide more information about the freshwater pearl mussel. You can find more information here. 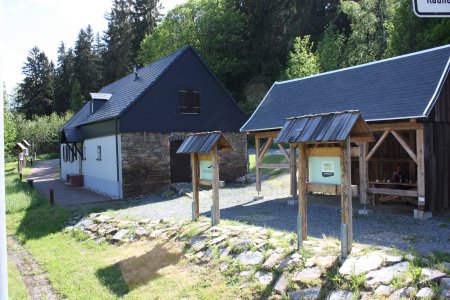 The breeding process for freshwater pearl mussels in Saxony was established outdoors at the start of the millennium. After the first promising trials, the Saxony State Foundation for Nature and the Environment (LaNU) used money from their Nature Protection Fund to purchase and renovate a small farmhouse in the Raunerbachtal valley. Thanks to its close proximity to the Raunerbach Stream, this site was a suitable water intake point for the breeding programme. Since 2012, the Saxon freshwater pearl mussels have been bred by the team in Vogtland.

The brown trout infested with the freshwater pearl mussel glochidia spend around 6 months in a fish farm in the region. Between March and May, the fish are then transferred to the different containers at the Saxon breeding station in Bad Brambach / Raun district in two rounds. On average around 150-200 fish are transferred, depending on the age and size of the animals. Once the larvae have finished metamorphosing and have fully developed into juvenile mussels, they simply drop off the fish. They are sorted out under binoculars and then are kept in containers in the mussel breeding station under optimal temperature and feeding conditions for several weeks. In summer, they are placed in the Buddensiek plates and then transferred to the rearing waters.

This two-minute video provides a quick summary of the most important points regarding freshwater pearl mussel breeding in Saxon Vogtland. 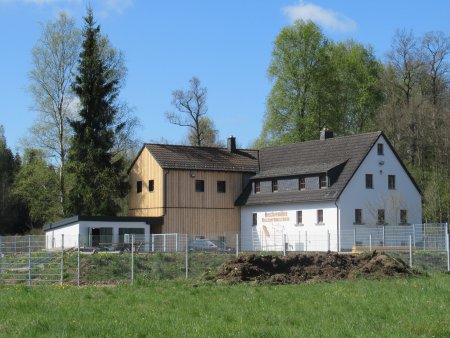 In 2018, Huscher Mill, a former flour mill built in the 17th century, in the Hof district was purchased by the Bavarian Nature Conservation Association e.V. as part of an EU project in collaboration with the German Federal Agency for Nature Conservation. It was subsequently converted into a freshwater pearl mussel breeding station and a “Water Habitat Education Centre”. This station has eleven holding basins for the host fish of the freshwater pearl mussel, the brown trout.

Thanks to the large number of basins, the breeding station can house ten different freshwater pearl mussel populations at once and keep the juvenile mussels separately according to their genetic origins.

Each year, around 600-700 brown trout are infested with glochidia (mussel larvae) that have been obtained from different stream systems throughout the region. The “infested” fish are kept in holding basins where the mussel larvae then grow into juvenile mussels in the fishes’ gills. From the start of November, around 50 fish are added to the Huscher Mill station each week. Here, the water is heated to around 18 degrees Celsius. This simulates late spring-like conditions in the basin and allows the 0.3 mm juvenile mussels to drop from the host fishes’ gills and sink to the bottom of the rearing basins. They are then filtered from the water with fine sieves and reared in the station with detritus, organic fine material from marshes and bodies of water, for several months. At the end of April/beginning of May, the juvenile mussels are placed into Buddensiek plates or sediment cages and returned to their natural water where they will be looked after for the next few years. Once they have grown to around 2.5 cm long and have reached the age of 4 or 5 years, the mussels are released. With around two-thirds of their shell buried in the riverbed, the mussels spend the next 70-80 years there.

The Huscher Mill breeding station regularly organises guided tours. In addition, between March and October a wide range of guided excursions and walks are organised in the area around the freshwater pearl mussels’ habitat.